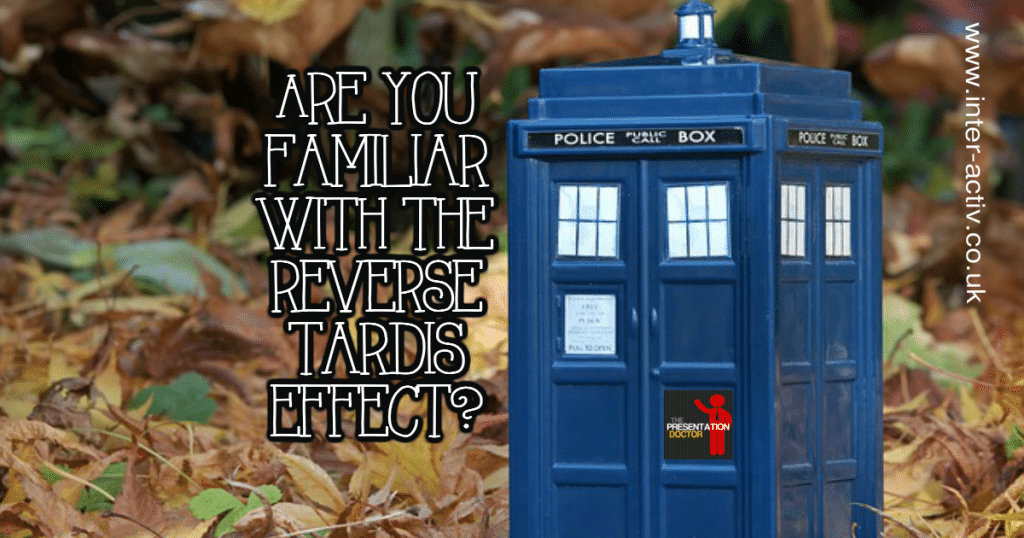 I’ve wanted to write a new post about public speaking confidence for a while now, but I was struggling to find the right angle to take. Then, I happened to be talking to a friend about the TV series Dr Who when the idea for this post hit me.

I admit it, I have been a life-long Doctor Who fan, but I’ve never written a blog post about The Doctor’s fantastic time travelling Police Box – The Tardis, until now, but please bear with me, it is relevant to public speaking confidence.

Apart from being able to transport itself and it’s occupants anywhere in time or space, the Tardis has the mind-blowing capability that makes it much bigger on the inside than it is on the outside!

But you can relax, I’m not going to explain how that works in this post, even if I could.

You see, it suddenly struck me that this amazing ability has parallels with most people’s’ perception of their own self-confidence, only in reverse.

“When it comes to your public speaking confidence, it’s always bigger on the outside than it feels on the inside.”

But it’s true. I know because I’ve worked with reluctant presenters like you for years, and the story is always the same. You think you come across as a nervous wreck, and your audience thinks that you look and sound pretty calm and collected.

And that’s just not me saying it; it’s the other students in my classes. You see, your public speaking confidence seems much bigger to those on the outside than it does to you on the inside.”

Being exposed to this wacky realisation is usually hard to accept at first because it goes against your internal belief system. That little voice in your head that is always telling you that you are a snivelling coward and the world’s worst presenter. Your psyche will almost certainly start coming up with reasons why you shouldn’t accept this life-changing new perspective, saying things like “It’s not true”; “Yes but that doesn’t apply to me,”  and, “They are just saying it to be nice!”

Confidence, like beauty, starts in the eye of the beholder. If other people think you present better than you think you do, remember that they are holding up a mirror to show you the real you! The more you can learn to accept this feedback, the quicker you will create a new, more accurate, belief system.

I know, because like you, I’ve been through this learning process myself.

Fancy a taste of time travel?

Join me in my Tardis and let’s jump forward in time to the moment where you are standing in front of a group of friends, colleagues or fellow students, having finished a presentation that you were proud of. Imagine how you are feeling now, as you hear and see them give you a warm and sincere round of applause. Take a moment to feel those feelings and then tell me if this short exercise in time travel isn’t more real than you might have thought.

Now, one last favour – If you enjoyed this post, please share it with your friends and colleagues using the share button below or to the side.

P.s. if you want the official explanation of why the Tardis is bigger on the inside, click this link.

Linkedin
Posted in Belief Change, Confidence, Public Speaking and tagged public speaking confidence
← Book Marketing Made Simple – A ReviewSix Elements of Vocal Variety and How to Master Them Part 1- Volume →