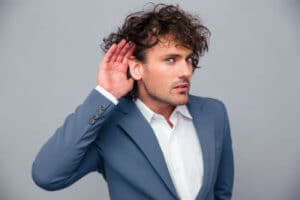 I find the Dragon’s Den TV programme presents an endless supply of pitching lessons.  Recently I was watching a replay of one episode, which featured a young guy called Joe Nelson pitching for investment in his They Fit, custom condom business.

It was a fascinating pitch which amazingly managed to avoid degenerating into schoolboy humour. Joe was clear, confident, and articulate, but he didn’t get the investment he needed.

Why? Well,partly I feel it there were some real laws with his business model, but a lot of it was because of the the way he came across. Deborah Meaden summed it up accurately by saying that, every time he was asked a question, he went into “sales mode”, and didn’t listen before answering the dragons questions.

This is an all-too-common mistake made by people who are passionate about their product.

So what do I think Joe needs to do to have a better chance of success in future pitches? My advice to him, and to other over-enthusiastic salespeople would be as follows:

1) Listen and show that he was listening.
True listening involves shutting off both your external and internal chatter. Remember that the words ‘listen’ and ‘silent’ have the same letters, just in a different order.

3) Ask for clarification.
If Joe didn’t understand the dragon’s question, he should have checked what they meant before jumping in with an answer. Too many people are afraid to ask questions in case they look stupid. In reality, asking questions appropriately almost always raises your credibility.

4) Answer the question asked.
It’s normal for politicians , to avoid the question, when being interviewed, but it’s not acceptable in a sales pitch. In my experience there are two main reasons for this all too common mistake. The first is mishearing the question because you were not listening, the second is deliberately avoiding a question you don’t want to answer. Improving your listening skills can prevent the former. Anticipation, courage and honesty can help solve the latter.

In conclusion
Whether you are appearing on Dragons Den, pitching to a new client, or seeking to persuade your boss, make sure you listen at least as much as you speak, and preferably twice as much.   The most successful sales people  know when to listen and when to pitch.

If you found this article on listening rather than pitching useful, I’d really appreciate it if you would share it with your friends and colleagues. It’s easy, just use the social sharing buttons below or to the side.