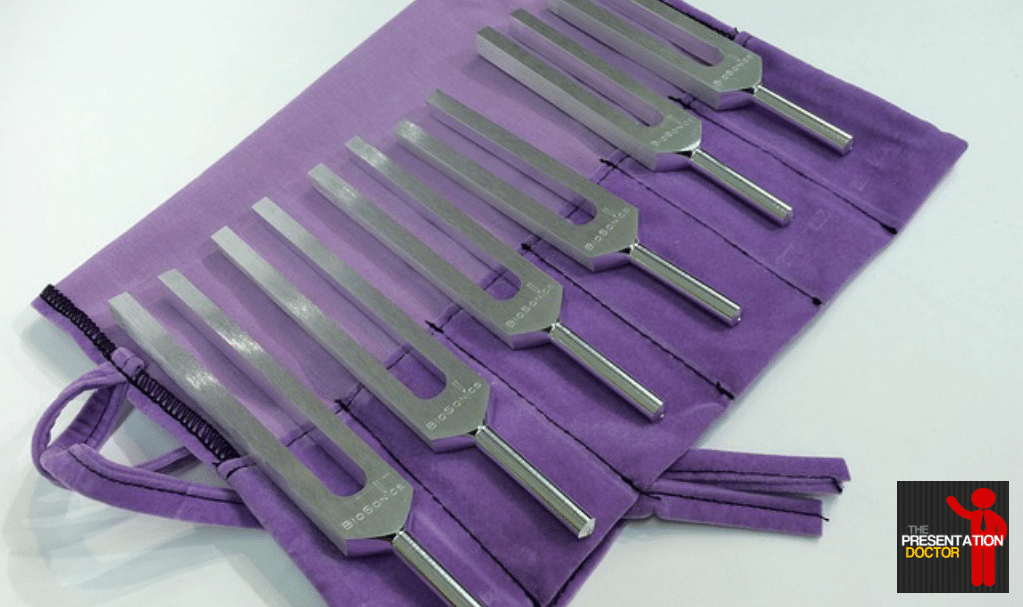 Having learned about the importance of speech projection and delivery speed in the first two articles in this series on vocal variety, it’s now time to turn our attention to pitch and resonance.

What is pitch and why is it important?

In vocal variety terms, pitch relates to whether you are speaking in a high, low or natural voice and it is defined as the rate at which your vocal folds vibrate. The faster the vibration, the higher your pitch, the slower the vibration, the lower your pitch.  Your “natural” pitch is influenced by a number of physical factors such as the length and thickness of your vocal folds as well as the size and shape of your body, but can also be affected by things like your emotions and your mood.  For example, if you are feeling stressed, the muscles around your vocal cords will automatically contract, and your pitch will rise.

There has been a lot of research into effects of vocal pitch and how it is perceived and there is now a body of academic literature supporting the idea of a general preference for lower vocal pitch. Participants tend to ascribe more positive personality traits to lower pitched voices (O’Hair &Cody, 1987; Imhof, 2010)

Margaret Thatcher became Britain’s first female Prime Minister in 1979, but when she first entered parliament in 1959 her voice was described by many as “shrill and hectoring”.  Researchers who have studied recording of her speeches over the intervening period noted that it gradually became deeper and more “steely.” Her biographer claimed that, around 1975 when she became the leader of her party, Mrs Thatcher engaged the services of a voice coach from the National Theatre to help make her voice more authoritative.

You can listen to examples of this change yourself here

Please note; I am not advocating that you need to go to such lengths, however, there are some simple vocal exercises that can help you develop your tonal flexibility. They can make your speaking voice more engaging and interesting as well as help you to project more gravitas and authority.

Have you ever heard somebody speak and felt that the richness of their voice was intoxicating? The term timbre relates to the texture of your voice, and it is distinct from both pitch and loudness.  In the human voice, timbre is a product of the way the sound made by our vocal cords resonates in the various air-filled cavities in our body.

The voice that our audience hears is a blend, based on the relative amount of resonance from each of these three cavities

You have probably heard people who, for a variety of reasons, speak mainly through their nasal cavities.  This type of voice is often described as thin and reedy or sharp. In comparison, a voice that includes more resonance from the throat and pharynx is warmer, richer and more rounded.

You can start to become aware of your natural placement and how to change it by reciting a simple nursery rhyme out loud.

Step 2 – Repeat this exercise with your fingertips touching the sides of your throat.

Step 3 – Finally, repeat the exercise again with the palm of one hand resting lightly on the front of your chest.

As you change the placement of your voice, you will notice a change in tone and timbre.

Once you have become aware of the physical sensations associated with speaking from each of these resonating chambers, you can experiment with blending them to produce higher or lower and richer or thinner tones.

Try this vocal variety exercise out for yourself and let me know how you get on.

Linkedin
Posted in Presentation Skills and tagged resonance, tone, vocal variety
← Speaking Speed – How to Perfect Your PaceStorytelling for Speakers – Beware The Dark Side →