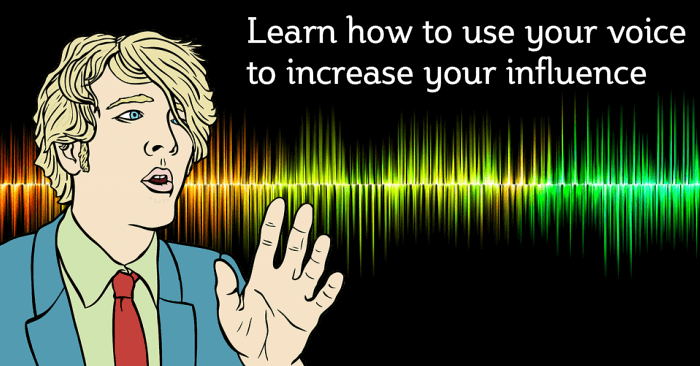 In this post, I’d like to show you how a greater awareness of one particular area of your vocal delivery can boost your ability to influence others.
Intonation is the way we change our vocal tone within a sentence, and it can dramatically alter the meaning of the words we speak.  You can harness the power of intonation to increase your ability to influence others.
…..
As a manager, salesperson or advisor you will need to influence others from time to time and understanding more about the power of intonation can have big benefits.
…..
Recently, one of my workshop participants was having problems getting her team to do what she wanted them to do. Listening to some examples of the sort of requests she was making and the way she was saying them it quickly became clear that she had a problem with inappropriate intonation.

The manager in question had developed a habit of raising her tone at the end of her request.  This type of intonation made them seem more like questions rather than instructions.  As a result, her staff took them as suggestions, which they often ignored.
…

We used video recording and playback to show the cause of her problem. Then, having raised her awareness, we helped her to solve it by practising the same requests with a descending tone. The result was a dramatic improvement in her perceived authority.
If you have this problem, then you too might benefit from a more conscious awareness of the way you use intonation.

Please leave a comment, I’d love to hear what you thought of this article.

Linkedin
Posted in Influencing, Presentation Skills, Public Speaking and tagged inflection, influence, voice
← What to do When Your Managers Suck(Q1xD)xQ2=R – A Formula for Sales Success? →